A Stream hydrograph and monthly requirements of the typical command area in the State of Himachal Pradesh is given below : 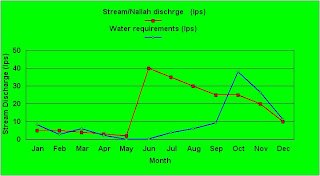 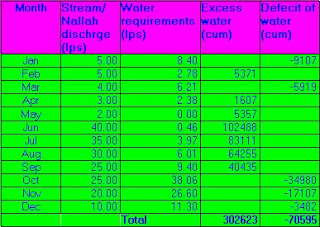 “Myth” in design criteria followed at present in the Himachal Pradesh: The peak water requirements as presented in the above fig drawn for 38 Ha CCA is 38 lps, but the lean period discharge of the given stream is 2 lps only it is therefore, project is being formulated for irrigation potential under the given command, would be only 2 Ha.

Can total irrigation potential of 38 ha CCA be created from the same source ?

“Water management technique for this problem”. ""Water availability may be staggered on time scale to meet water requirement by temporary water storage in-built in to the distribution system.""

***Why it is beneficial to the Hilly state like Himachal Pradesh**

1. Most of the command area in Himachal Pradesh, especially in the higher reaches, are staggered (i.e. boundary of chak/sub chak is not in continuation). And therefore, Non-command area can be judiciously utilized for construction of temporary storage without any loss of cultivable area.

2. Optimum number with small capacity of storage , distributed over the GCA , is more economical than a few number of heavy capacity of water storage because later would be made of heavy RCC structure.

3. Storage structure near to the farmer’s chak would be conducive for development of individual micro-irrigation system.

4. Much more command area can be brought under irrigation with same availability of water.

5. Costly water harvesting structure which requires much more technical knowledge especially movement of the boulders in the hilly areas and high turbidity can be avoided compared to the simple monthly water discharge measurements for this case.

6. Temporary water storage structure will act as a break pressure tank and this will reduce erosion of CC channel bottom due to the scouring velocity of water which is a common phenomenon on steep slope.

Parameters to be considered while designing the irrigation system

1. Annual Hydrograph of the stream/nallah/khad and its monthly dependable discharge is the prime requirement.

2. Optimum number of the storage tanks based on fragmentation of CCA and site feasibility is the second requirement.

3. Optimum number of the temporary storage system and optimum size of the Chaks will give least cost and high use efficiency with lower operation cost.

4. Capacity of the temporary storage tank should be in proportion to the deficit of the water under each chak individually.

5. Every temporary structure must have one inlet but two outlets. Out of the two, one will be a regulated type at the base of the temporary storage structure and other would be at the top i.e RL of designed water table in the temporary water storage. Regulated outlets would be operated during the lean period of the discharge in the source stream and unregulated outlet will be used for normal flow, when there is sufficient water in the stream/Nallah.

6. During the transition period, when discharge is less in the stream/nallah but still more than what it remain during lean period, additional outlet at a optimum height depending on short-fall may be incorporated in the temporary storage structures . This would serve as an effective check to save the precious water being drained-out uselessly owing to opening of the bottom outlet as per ‘one inlet and two outlet’ design suggested in para 5. 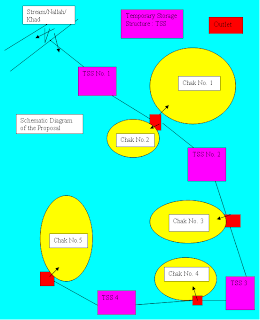 (Note: The term, ‘temporary’ in temporary storage structure, should not be confused with its flexible nature of its construction. It is mainly dealt for the function which it will serve i.e, holding the excess water in surplus period and maintaining the requirement even during lean time. )

1) The one year discharge measurement is necessary at the site of probable diversion structure along-with daily/monthly precipitation data received over the catchment in which the proposed stream /Nallah / Khad falls.

3) This will give relationship between rainfall (as input) and runoff (hydrograph as output).

4) By putting the dependable rainfall data (analyzed by frequency analysis using Webull’s formulae) as input this will give dependable discharge (dependable hydrograph) for the selected catchments.

5) This would provide the basis of quantifying monthly excess and deficit of water with time scale which would be the deciding criteria for designing temporary water storage system would required in GCA.